As a result of the Russia/Ukraine conflict, an increasing number of participants have chosen to stop trading Russian-origin diesel and heating oil cargoes.

From 1 June 2022, General Index will stop reflecting Russian-origin product in its primary European diesel and gasoil indexes, in line with the trading preferences of market participants. This affects the following indexes:

To capture that portion of the market which continues to trade Russian-origin oil, General Index is launching two new NWE assessments: a Russia-inclusive price, and an index reflecting the spread between Russia-inclusive and restricted-origin diesel prices.

A long-awaited embargo on Russian oil by the European Union is finally within sight. Leaders of the 27 member states have this week hammered out an agreement that will ban crude oil imports within six months and refined products within eight months. The embargo will only apply to seaborne imports. An exemption was granted for pipeline imports into Hungary, Slovakia and the Czech Republic.

The EU deal comes almost three months after the United Kingdom announced it would phase out Russian oil imports by end-2022.

Political agreements provides clarity for the road ahead. But the truth is, in search of a more immediate solution, the market has already taken action. Traders have been self-sanctioning away from Russian oil, including diesel, for months.

Read our special report: How to solve a problem like Russian diesel?

Most offer features no restrictive clauses. A similar trend has been visible on the less liquid Gasoil 0.1% cargo markets.

General Index has plotted a chronology of this transition using the trade data on the below infographic, which supports our announcement today to exclude Russian origin from the primary diesel and heating oil cargo indexes. 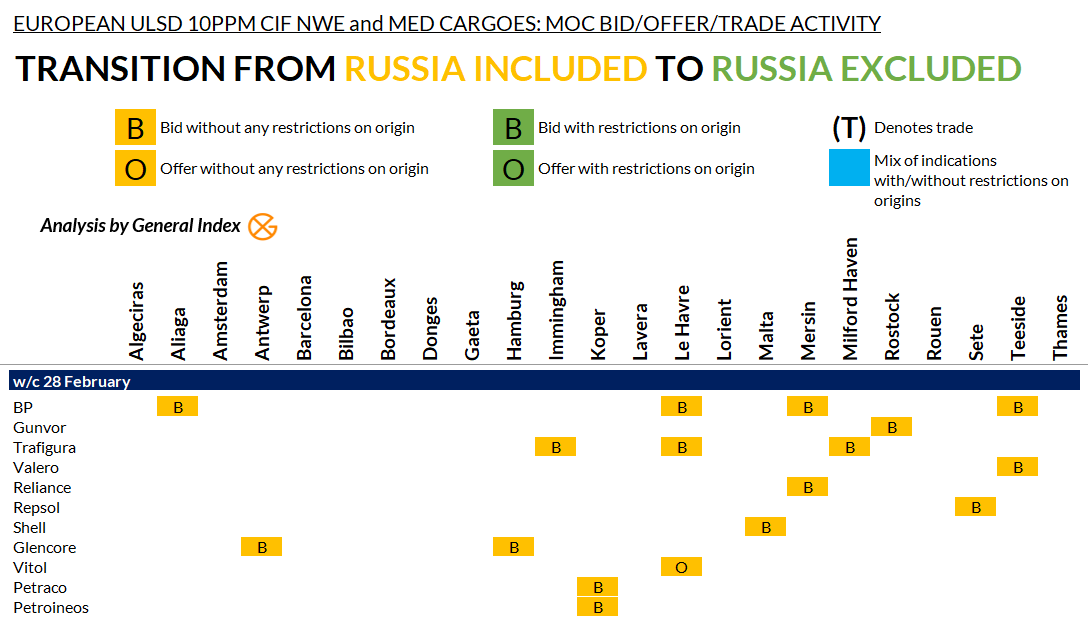 For more information on any of our indexes, contact us.