This week's Global Market Analysis takes a look at how US oil infrastructure dodged the wrath of hurricanes Ian and Fiona, and the rallying of gasoline prices in the Midwest.

US oil infrastructure dodges hurricane wrath of Ian and Fiona

The first hurricanes of the year have hit the Americas and, while destructive, they have done little to support fuel markets with the sort of price increases usually seen during tropical weather.

Fuel purchases rose ahead of the storm, and the pull for oil products will drop drastically afterward. Diesel for emergency vehicles typically rises, but gasoline and jet fuel markets will need time to recover. The ships that supply Tampa and south Florida will wait until well after the hurricane to arrive, resupply markets and get commuters moving again. Tourism into Walt Disney World and other Florida attractions also was lost. 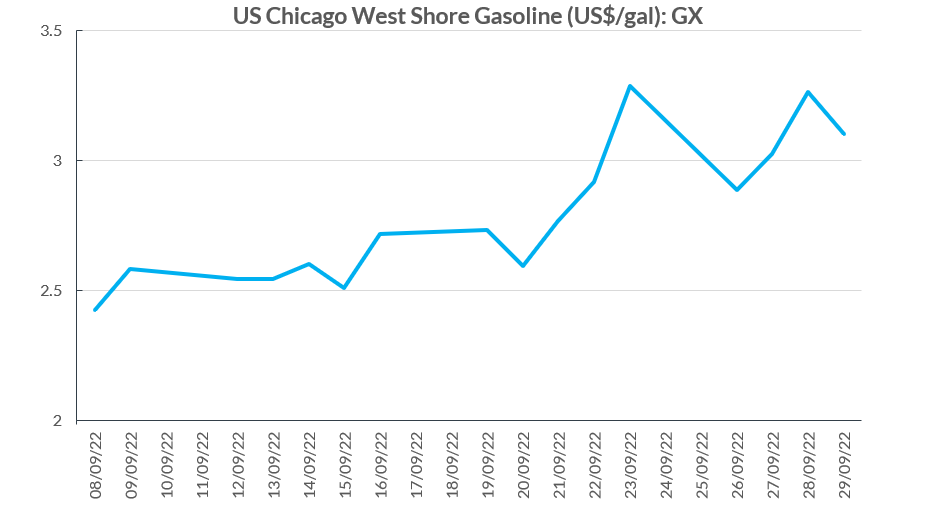 Prices have been rising, but what is supporting US fuel lifts it far from the beaches of the Gulf Coast. Retail gasoline reversed three months of declines in September across the US, with fuel rising on the back of refinery production events and tightening stocks.

California gasoline reached more than $2 a gallon over NYMEX futures on imbalances there, up from just eight cents over future late-June; and Chicago fuel climbed briefly to 80 cents over basis, up from 41 cents over.

A refinery near Toledo, Ohio, shut down after a fatal fire and is not expected to reopen until 2023, lifting fuel value across the Upper Midwest.

Refinery utilization was above 90% in the Midwest for most of the summer, but it has dipped below that threshold, in part thanks to the fire, federal government data show.

The rise in gasoline value has dampened interest in shipping the fuel. Pipeline line space for gasoline on the Colonial system has dipped to a discount to similar line space for diesel for the first time in several months.