Market ponders short-term direction with $100/b crude in view

Observers were prepared for crude prices to cross the triple-digit threshold this week. General Index assessed Dated Brent at over $98.20/b on 7 February, while Brent futures settled above $93.25/b the previous trading day.

Amid talk of $100/b call options, extreme market tightness and interest rate hikes, leading banks are now forecasting $125/b crude this year. But after a near-$20/b gain during the period 24 December–4 February, bulls appeared to pause for breath, with $100/b looming just over the horizon, Saket Vemprala writes.

The bullish case has been supported by firm market fundamentals. Over the course of January, combined US inventories of crude (commercial), gasoline and distillates averaged around 41.5mn bl less than the 2015-2019 average. In the week to 4 February, US commercial crude stocks at Cushing, Oklahoma fell to an 11-week low, and are around 40% below year-earlier levels and 28% below stock levels on 7 February 2020, just before the pandemic-induced oil demand drop in western countries.

On the consumption side, US oil product demand appears very firm – the latest EIA data estimated product supplied (a proxy for demand) at an all-time high of 21.9mn b/d. With echoes of 2008, diesel/gasoil tightness appears to be driving some of the strength in crude. In the ARA region, independent stocks have fallen to their seasonal lowest since 2008, as diesel imports into Northwest Europe from east of Suez fell in January to their lowest since August 2020, according to Kpler data. This is borne out by the sharp backwardation in ICE Gasoil futures.

The combination of mild winter weather and a diversion of US LNG cargoes to Europe have helped to mitigate the impact of a tight European natural gas market, tempering the pull of distillate from Asia, but supply in the latter region has also been affected by reduced Q1 product export quotas for Chinese refiners. OilX estimates the Asian gasoil/diesel supply-demand balance in January at -129,000 b/d, down by 413,000 b/d year-on-year and below the five-year average, although this is expected to swing into surplus this month.

The crude supply side also provided plenty of support for market bulls. Production from OPEC+ countries continues to lag the targeted 400,000 b/d monthly increases pledged by the group, in order to meet rising demand from countries loosening Covid-19-related restrictions. OPEC production rose by 64,000 b/d in January m-o-m, according to an average of secondary source estimates published in OPEC’s monthly report, with some others estimating the monthly output increase lower, at around 50,000 b/d.

Russian oil production in January fell around 50,000 b/d below its quota. The effects of these events were felt across various crude instruments: backwardation was observed in Brent futures as well as more granular instruments such as weekly CFD contracts which reflect the spread between the implied (assessed) Dated Brent price for a given week and the relevant month’s BFOE forward: on 9 February, General Index assessed the 14-18 February CFD at a $3.75/b premium to the April forward, up from a $2.01/b premium a week earlier. And North Sea cargo bids and offers dried up in the end-of-day pricing window as a backwardated market meant less incentive to trade FOB cargoes and re-sell on a delivered basis.

Against the backdrop of a wider backwardation in the Dubai crude partials market and Brent futures, Saudi state-run Aramco hiked prices for cargoes of its March-loading crude to all export regions, with Europe seeing particularly large increases. But triple-digit oil – once breached – may face headwinds. The EIA’s latest report is forecasting a global crude stockbuild from Q2 onwards, and domestic crude production estimates for 2022-2023 were revised up from their previous monthly report by 170,000-190,000 b/d to 11.97-12.6mn b/d. There are also firm expectations for non-OPEC production growth this year.

Finally, diplomatic talks continue between the US and Iran, potentially allowing for a return of Iranian volumes to the market, while tensions between Russia and the West over Ukraine may ease soon, taking some geopolitical risk premium out of crude prices.

Amid heightened geopolitical tension in the West and fundamental supply tightness, crude prices have been driven to record highs last seen in 2014. But spiralling prices led by markets West of Suez has not been enough to facilitate a spike in the arbitrage of cheaper barrels from the East, Chen Ee Woon writes.

In the past week, General Index Dated Brent topped US$98/b (+2% since the start of 2021), Brent futures rallied above $94/b (+17%), and WTI futures flirted with $93/b (+21%). We detail the reasons for the gains at the top of this report. Crude markets in the Mideast Gulf have also been supported by global events. General Index Dubai Partials M1 reached $90.95/b on Monday, 7 January; but the rally has been a little less severe than what Brent and WTI have experienced, rising by some 16% so far this year.

Mideast crude moving a step behind the West is demonstrated by a wider Brent/Dubai EFS, which recently broke through +$5.00/b. The EFS is essentially a spread between Brent futures and Dubai swaps, and acts as a barometer of Mideast crude strength relative to the global Brent benchmark. A positive Brent/Dubai EFS indicates that crude linked to the Dubai benchmark is relatively cheaper than Brent-linked crude. This would typically discourage barrels being arbitraged from West-to-East and, in theory, support the shipment of barrels from East-to-West. 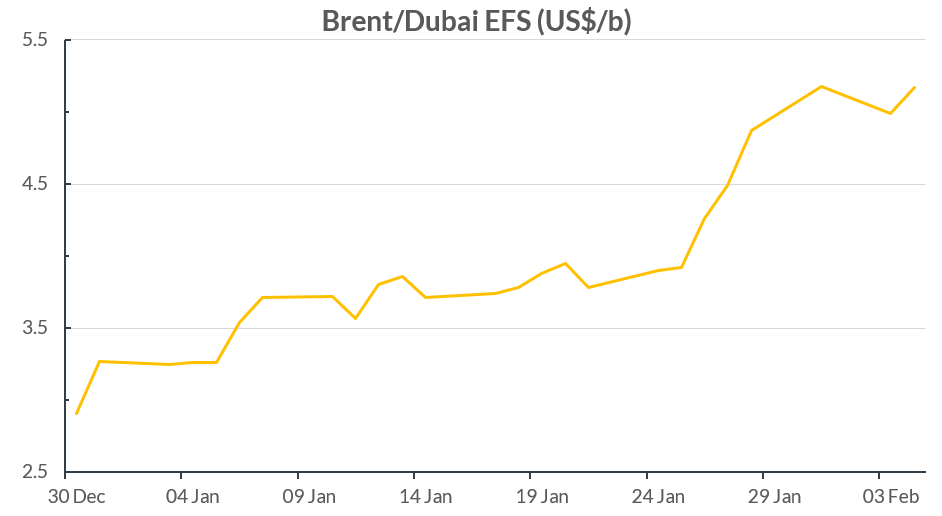 But tanker data shows little sign trade flows have yet been stimulated by the Brent and WTI surge. According to Kpler, total crude exports leaving the Mideast Gulf for the West totalled 1.13mn b/d in January, only a little higher than the 1.08mn b/d recorded in December. Departures this month are currently estimated at 841,000 b/d. This is also supported by anecdotal evidence. “Arb is shut, PG [Persian Gulf] is good,” said one trader, referring to the how local crudes were popular right now, because they are competitive compared to crude from the Atlantic Basin.

The relatively cheaper price of crude in the Mideast has resulted in increased competition for local barrels. The Dubai M1/M3 spread, a barometer for regional spot crude prices, has widened significantly, rising above +$3.50/b. 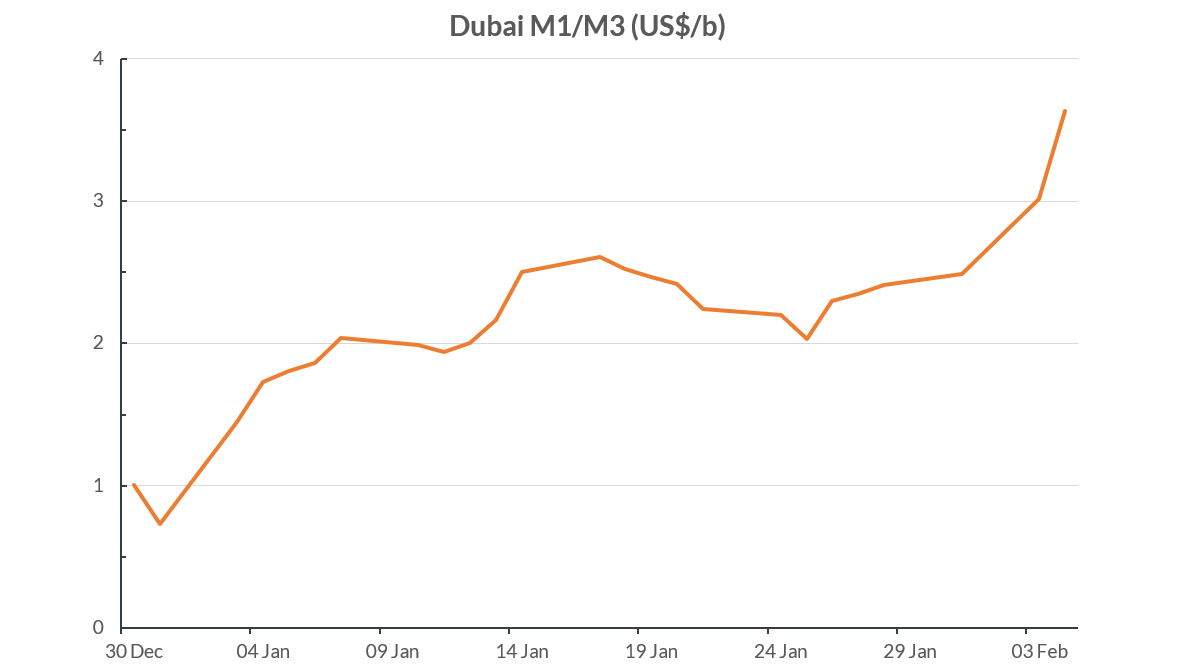 Mideast producers have identified this opportunity. Both Aramco and Adnoc released Official Selling Prices (OSPs) in line with spot market indications, despite expectation from some traders that the OSPs might be lower due to coronavirus concerns.Spot trading activity also indicated some overhang from January.

Both Totsa and Rongsheng were heard to have resold March loading crude in early February which is highly unusual. Asian countries are currently facing a rising wave of coronavirus cases which have yet to plateau, especially after the festive Chinese New Year season.

The strength of OSPs can be demonstrated by looking at the change in Dubai M1/M3 monthly average from December to January and comparing them to OSP changes for Arab Light, which is a representative Mideast crude grade produced in large quantities. Dubai M1/M3 increased by US$0.64/b, according to General Index assessments, and there was little separate them from Arab Light OSPs which rose by US$0.60/b. Differentials in the spot trade are expected to remain supported for the rest of the month.

Although no spot trades were confirmed to have moved yet, General Index has already heard traders inquiring about possible movements on the market. 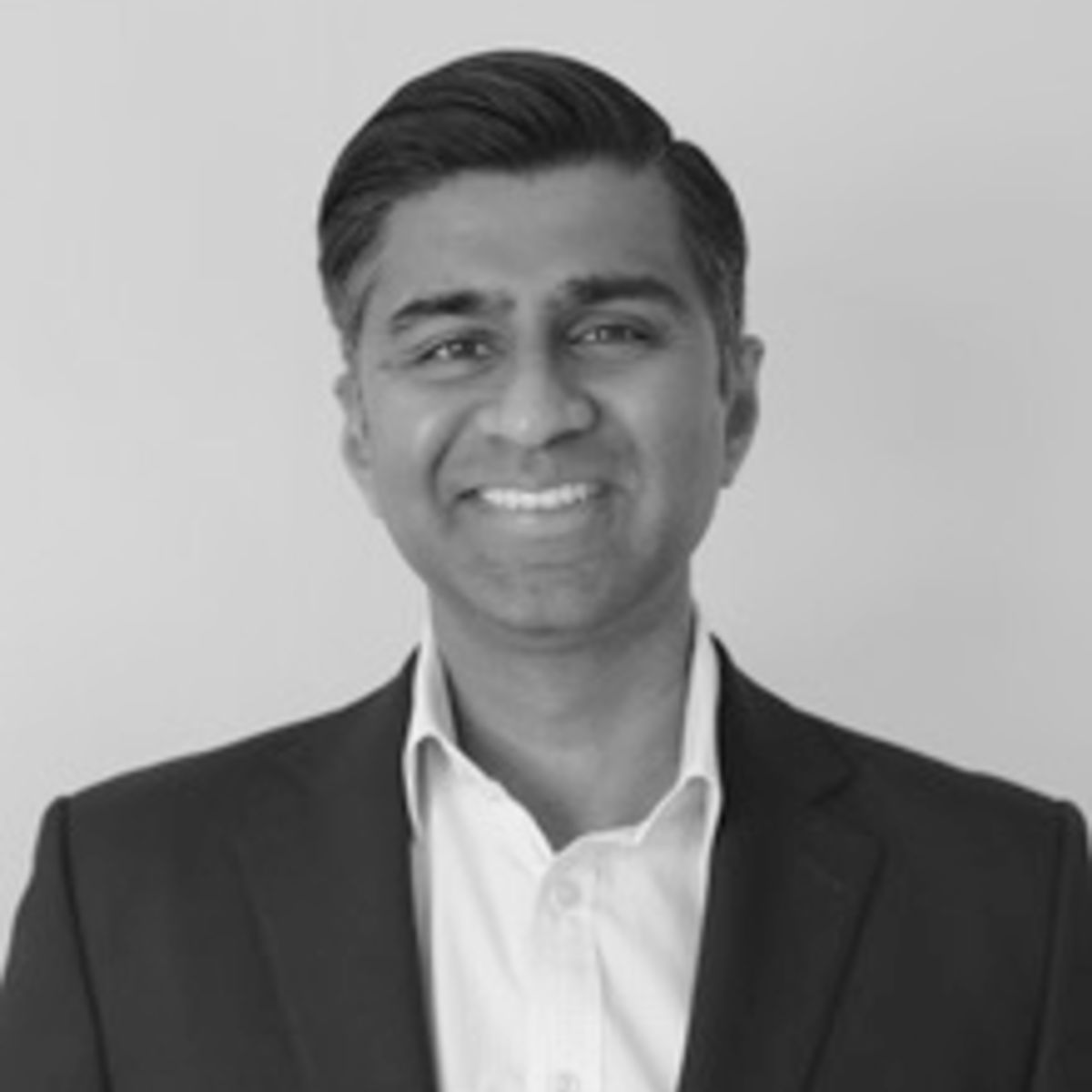 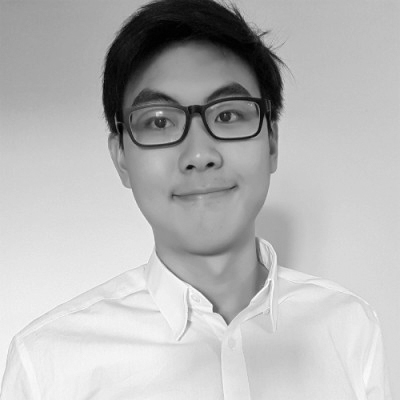